Sadly, we are starting the new year off without our beloved Mabel. She was a huge part of what made Zen Belly and will continue to be the passion that drives us. She deserves nothing less and  the month of January was left as a dedication to her.

While our goals at Zen Belly aside from promoting healthy alternatives to your canine pal is to support shelters and promote adoption, we feel the friends we have made along the way have been instrumental in making our goals that much more attainable.

Without the support of all of you, so many of our “big dreams” for the future would continue to be just that…dreams. This is our way of saying thanks, honoring them and giving you a peek inside of the best part of life with dogs.

So without further ado, we would like to introduce you to our February “Zen Belly Friend of the Month” Noodles! 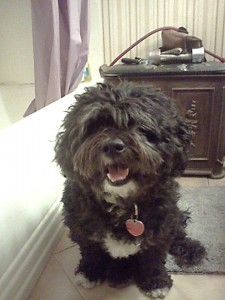 Noodles is a 5 year old black and white (Shih Tzu / mix) who is full of zip and fire! He is the furry companion of Joe Marino and have been friends of  Zen Belly since our early days. In fact, Noodles on occasion was one of our “taste testers” when we had a new creation that we were anxious to share! This finicky little monster gave it to us straight! No bones about it, we had some success but he was just as willing to let us know when we needed to go back and make some changes! What a wonderful feeling it was when we got his approval because we can tell you it wasn’t always easy!

An unusual name you may think, Noodles  was actually named after a gangster character in a film which we find quite funny because he has got to be the most unintimidating dog we have ever met! 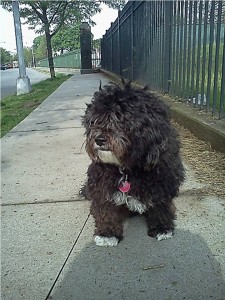 He resides in Queens with his Dad and he loves to walk around the neighborhood and socialize with all the residents, shop keepers and children who all know his name. Even the local Pastor calls out to say hi to Noodles as he makes his rounds! He truly is the “mini mayor” of Glendale and revels in all the attention!

Noodles is an easy going, very friendly young boy. It doesn’t take much to make him happy. A walk, ride in the car, belly rubs and tossing around his favorite ball are a few of his favorite things. Recently, he has gained the nickname of “The Great Noodini” because he has mastered the art of escape. He just loves to visit his friends and decided he was going to go when it suited him. So for now, poor Noodles is on “lock-down” until the new fence is finished. 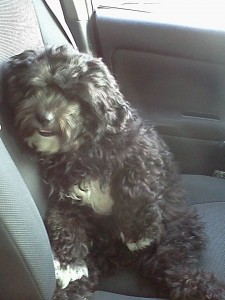 Noodles stood out to us was when he was “taste testing” a few of our cookies early on. Our Black and White Confection was one of the ones he approved and aside from our joy that he was pleased ,we didn’t think much more about it. Two weeks later we saw Noodles again and we had a sample package on hand that we gave to him. When he saw the Black and White cookie he jumped up and did a spin! A 360 degree SPIN!!! We were beside ourselves with laughter and absolutely thrilled that we really won him over. To this day when we bring Noodles a Black & White Cookie he still does his spin! 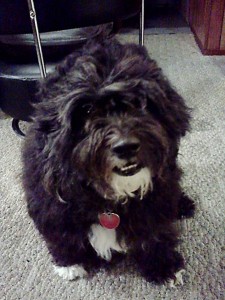 He truly is a memorable guy! Full of energy, he’s got a tail that never stops wagging and a huge heart big enough to fit the entire world in! Everywhere Noodles goes he always leaves having made new friends. His Dad is very proud of his pal and credits Noodles with helping him get into better shape. Joe had this to say about his buddy, “I have a long way to go but he certainly has brought me a long way already!” “I can honestly say that Noodles has changed my life for the better. I went in thinking I was going to help give a dog a good home and he ended up giving me a better life!” “I love this little guy, and I can’t even say that about my Ex!” Wow, I think that says it all! We couldn’t be more happy for these two bachelors! We just love happy endings!

Zen Belly is so honored to be able to call Joe and Noodles friends! We are so flattered that we can call Noodles a fan as well! We know once you see this little guys face you will find it easy to see why he is such a lovable local celebrity! He is certainly an A- lister in our eyes! Here’s to Noodles, Our Zen Belly Friend of the Month! 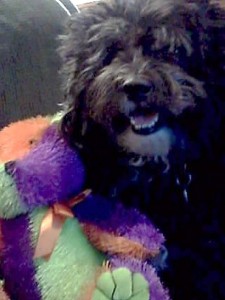