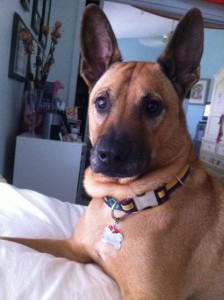 Four years ago Bear met the Anascavage family. Now not only is he a part of the family, he’s practically the epicenter!

His quirky good looks stem from a mix of both the Shiba Inu and Cocker Spaniel breeds. Mom, Jessica has a particular weakness for his “satellite ears”. Bear is all too happy to flaunt them along with his big brown sappy saucer eyes that will render you powerless! 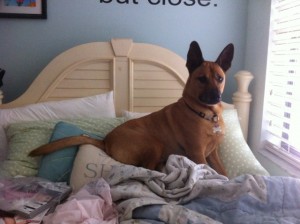 During his days at his Florida home Bear can be found perched on a bed looking out the window daydreaming. Sometimes, maybe a nap on someone’s empty bed as long as their pillow meets his fluffy standards. Boy, Bear really has mastered the art of leisure! By late afternoon, Bear goes on the hunt for long lost treasures that he thinks the family has been pining for and would pay dearly to have back. Anything and everything he can barter for a cookie… including socks in abundance. 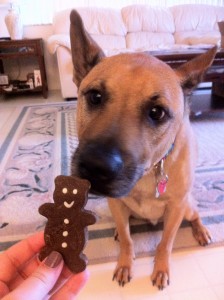 We are told when Zen Belly cookies are in the house, Bear is really on his game for trade and when things are sparse it’s not unusual for him to try and remove the socks right off your feet! Wow this guy’s got some hustle, what a character!

Bear has brought the Anascavage family so much happiness and joy they often joke he is the most spoiled member of the family. For their Care Bear they wouldn’t have it any other way! 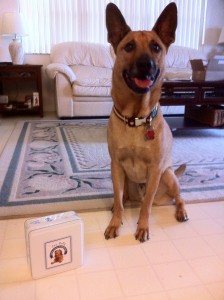 We think Bear is a real charmer and it gives us great pleasure to know he is such a fan of our cookies. We are so honored to have him as a Zen Belly friend!